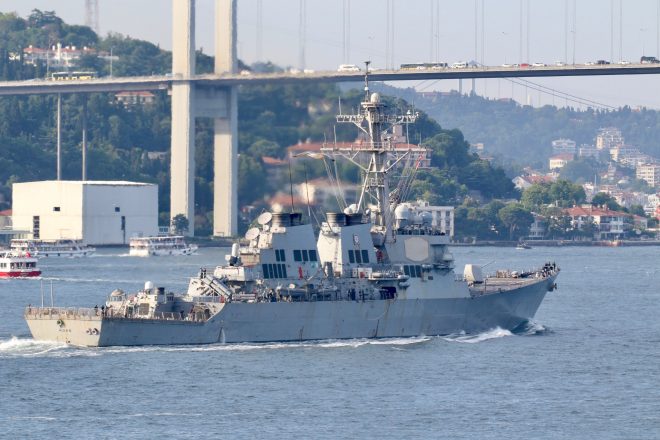 Turkey has no problem delaying approval of Sweden’s and Finland’s NATO membership applications while pursuing its own talks with Russia on opening Ukrainian ports in the Black Sea to allow shipment of grain overseas, a group of security experts said on Wednesday.

Speaking at an Atlantic Council event, Pavel Popescu, chairman of a key Romanian parliament security committee, said: “I see a trap in entering into one-off negotiations” with the Kremlin. Russian President Vladimir Putin did not want Europe and NATO to present a united front against Moscow’s invasion of Ukraine and bullying of smaller neighbors like Moldova and Georgia, he said .

“Diplomacy is dead in the Kremlin,” he said. “We didn’t understand that for years.”

So far, talks on clearing the waters near Odessa and allowing the escort of merchant ships carrying around 20 million tons of grain for export currently stored in Ukraine through the Russian blockade have not resulted in nothing.

In the talks in Ankara, Turkey has called for an easing of sanctions against Russia. The latest sanctions were imposed following its February 24 invasion of Ukraine. During the negotiations, Moscow pledged not to attack ships carrying grain, but insisted on inspecting incoming ships to ensure that Western weapons were not secretly being shipped to Ukraine.

At the start of the conflict, Turkey, as was its right under the Montreux Convention agreement of the mid-1930s, closed the Dardanelles and the Bosphorus, transit points between the Black Sea and the Mediterranean, to warships.

Jim Townsend, now deputy senior fellow at the Center for New American Security, said, “Turkey sees itself as the guardian of the Black Sea.

“Turkey has already done it” by going it alone without consulting the United States or NATO. A recent example is Ankara’s decision to purchase Russian-made S-400 air defense systems. In response, Turkey was ousted from the F-35 Lightning II Joint Strike Fighter program.

Noting that President Recep Tayyip Erdogan is a candidate for the elections, the former Pentagon official added that he “needs to reach an agreement eventually” with the United States and NATO.

“Dear Turkey, we know your problems,” Popescu said, referring to Turkey’s complaints that the two Nordic countries provide a safe haven for Kurdish terrorists. The three nations met in May to discuss the situation, but did not reach an agreement.

Membership applications will top NATO’s agenda when it meets in Madrid later this month. To be accepted, all current members must approve applications.

Popescu added: “we must solve this problem as a priority” by admitting the two into the alliance to limit “Russia’s capacity in this bloody war”.

With the war now in its fourth month, “I think the fraying is normal” in continued unified action, said Catherine Sendak, a former Defense Ministry official specializing in the Black Sea region.

“People will push back” the impact that the sanctions imposed by the war on Russia have on them. Townsend and Popescu said this is increasingly true when it comes to energy, citing both Germany and Hungary, which are heavily dependent on Russian imports.

Several times during the event, Popescu said “we need a coach”, referring to the United States, to say “this is the strategic concept” and you do this, others do that . He added that nations, especially in the Black Sea region like Romania, are asking “what are we doing?” Even before February, Bucharest increased defense spending in response to earlier Kremlin attacks on neighboring states. For years, it has also reduced its dependence on Russian natural gas.

Sendak noted that the strategies that worked in the Baltic to counter the growing Russian threat in the north do not necessarily apply to countries around the Black Sea. “We are finally talking about a region that we should have been talking about for 10 years.” The question is “what do you want to see”, and include Moldova and Georgia in the answer.

At the MoD, Townsend said more studies were not needed. “Let’s not dwell on the paperwork,” he said. “So many times, strategy follows actions.” He said “what is needed today” to strengthen allies and partners around the Black Sea includes military sales of improved surveillance, intelligence and reconnaissance systems; improved maritime awareness and clearance capabilities; and, if Turkey allows passage, a NATO naval presence.

“It will take money” to do this on NATO’s southeast flank and it will compete for dollars with planned defense spending for the Indo-Pacific.

Sendak said Congress “has the ability to set the tone” through the National Defense Authorization Act, which is currently going through House Armed Services Committee tagging.

The policy document, which the Senate panel begins annotating next week, can set goals for security assistance and cooperation and make decisions on platforms.

$4.06 billion in sales expected for PulteGroup, Inc. (NYSE:PHM) this quarter

“The Alliance for Southern California Innovation partners with Pacific Western…